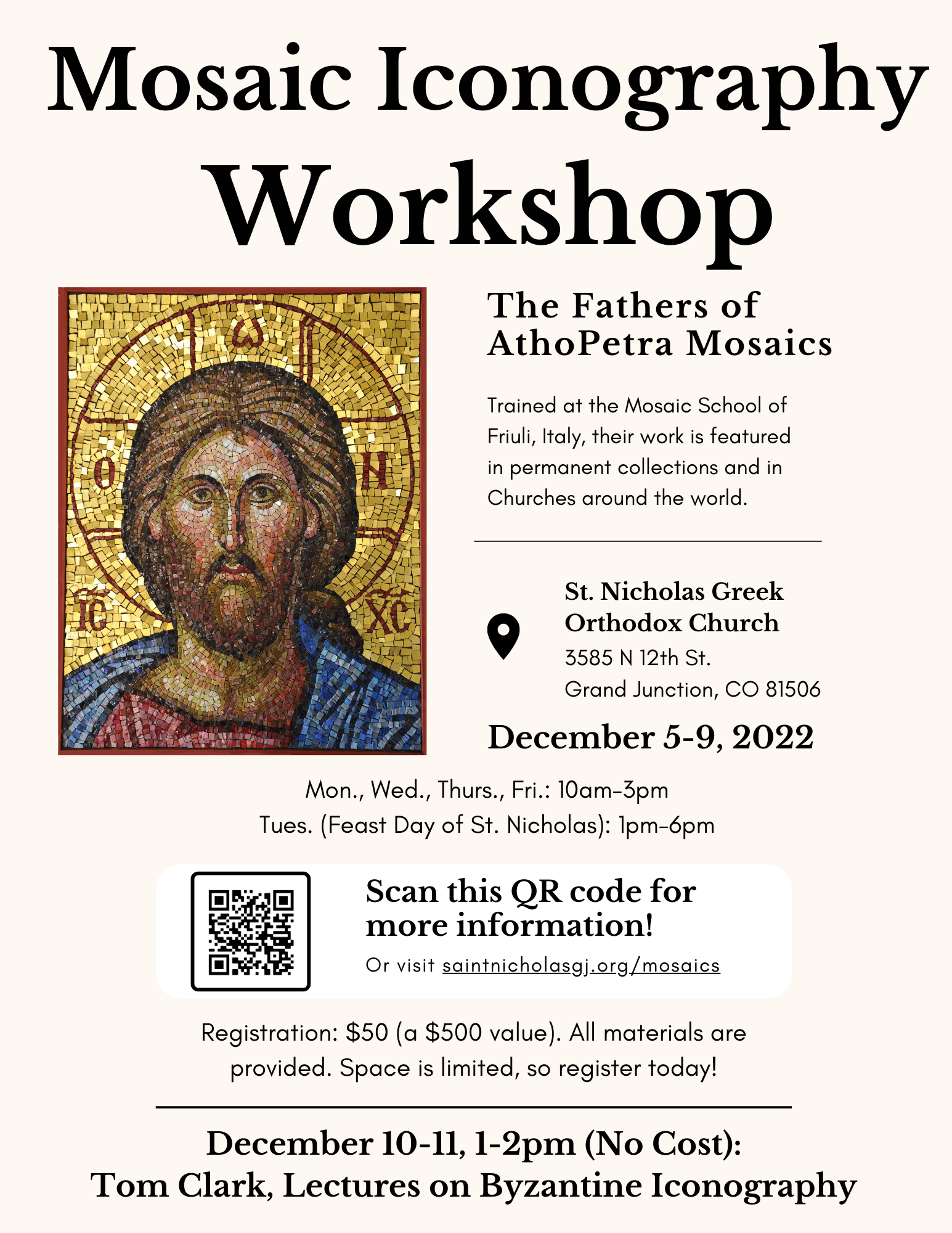 The cost of registration is $50 per person. Registration includes all materials, tools and a complimentary apron. The remainder of the costs for this event (valued at $500 per person) have been generously underwritten by a grant from Leadership 100.

Tom and Sophia Clark’s sons grew up surrounded by sketchbooks, canvas, easels, wood panels, gesso, brushes, paint, glues, gold leaf and splattered colors . From this they found their own artistic expression using the tools of mosaicists. Their colors are the brilliant glass hues forged in the furnaces of Venice and Murano as well as the earth-colored stone found in the riverbeds at the foothills of the Alps and  the regions of Umbro and Sienna. From this and all the other inspirations and experiences in their lives, AthoPetra was Blessed and born.

All five sons, four of whom are monks, have also had formal art training from their early elementary school years. They attended the Hellenic Children’s Art Museum of Athens weekly and received many awards. One of their pieces is in a permanent exhibit in the International Olympic Museum in Lausanne, Switzerland.

Through their high school years, they apprenticed with their dad in the United States in the various churches he was commissioned to paint, including St. Nicholas of Grand Junction. Tom and Sophia’s sons have studied, volunteered and participated in many programs of the Greek Orthodox Archdiocese of America—Hellenic College, Ionian Village, IOCC and Crossroads to name a few.

Upon high school graduation, with the Blessing of their lifelong Spiritual Father and Elder, Archimandrite Dionysios, it was natural for them to attend the Mosaic School of Friuli, Italy, foremost in the world. Their professors were delighted to have the sons of a renowned Byzantine Iconographer in their school and town, known as “The City of Art and Re-birthplace of Mosaic”. Works from the scholars of The Mosaic School of Friuli are featured worldwide—from The Dome of the Holy Sepulchre in Jerusalem to the Subway Station of Ground Zero.

While studying Classical, Byzantine and contemporary mosaics at Friuli, they were accepted to apprentice in the Micromosaic Laboratory of the Vatican; besides Micromosaics, they did restoration work in St. Peter’s Basilica in Rome. Also while studying, they were awarded 1st place for several of their pieces including a competition in honor of the Gyro d’Italia bike race.

The Fathers have taught Mosaic courses at the Greek Cultural Center in Trieste, Italy; Nordal, Norway; in Kitzbühel, Austria; and in Tulsa and Oklahoma City, Oklahoma.

They are very honored to have works in permanent collections in Greece, Italy, Vatican, Georgia, Norway, Lebanon, Romania and the U.S. They recently installed 5 exterior mosaics for the Greek Orthodox Church of St. George in Shreveport, Louisiana, commissioned in honor of the church’s 100-year anniversary. And more recently, they installed 3 exterior mosaics onto the Chapel of St. Irene at a Palliative Care Center in Bucharest as well as onto the Church of the Holy Archangels in Northern Bucharest.

Two of the Fathers also served as consultants at Dumbarton Oaks Center for Byzantine Studies in Washington, D. C.

In addition to creating mosaics at their Monasteries in Oklahoma and Zakynthos, Greece, the Fathers of AthoPetra also offer mosaic courses several times throughout the year.

Tom Clark has come back to the United States where he was born and raised. He has been painting murals and panel icons for almost four decades from his studio in Greece where he and his wife Sophia met; where he studied; and where they raised their five sons.

After attending Hellenic College, Tom, originally from Chicago, served the Greek Orthodox Archdiocese of America as a counselor at the Ionian Village where he met Sophia. Tom continued to serve the camp conducting workshops as a Resident Iconographer while Sophia was Operations Manager, serving and working for 30 summers in the Western Peloponese.

Tom has also conducted workshops and lectures including the Crossroads Summer Institute at Hellenic College in Brookline, Massachusetts, the Sacred Monastery of St. Nina in Maryland, and at the Scuola Mosaicisti in Spilimbergo, Italy.

It was during Tom and Sophia’s sojourn to Greece in 1984 that Tom met Master Iconographer Kostas Tsilsavides, under whom he apprenticed for five years, including on-location projects in churches in Northern Greece and Southern Italy. Tom and Sophia travelled extensively visiting Churches, Temples and Museums in beautiful and holy places throughout the Ancient World where culture and art flourished for centuries.

“For me, the greatest teachers are the icons themselves. I have two obligations. I have to be true to what God wants me to say, following Tradition. At the same time, I have to speak to my time and place in history.”

Tom’s work has been exhibited on numerous occasions including a Symposium presented by the Ecumenical Fraternity in Jerusalem, Israel, where he and his family lived for one year in the Monastery of the Holy Cross, where he worked while traveling throughout the Holy Land.

Tom is the featured iconographer on the award-winning website of the Greek Orthodox Archdiocese of America. The Archdiocese also uses his icons for several of its publications including the Orthodox Pocket Calendar produced by Stewardship Ministries, the Archdiocese Wall Calendar and the Annual Planner produced by Youth Ministry. He has also created work for publications by Holy Cross School of Theology, the Department of Religious Education, the Metropolis of Chicago Aids Task Force, St. Basil’s Academy, The Young Adult League, Conciliar Press Ministries, Ancient Faith, IOCC, Community Cards and Light and Life.

Tom’s body of work can be found in churches and homes both in the U.S. and abroad and includes a panel icon given as a gift by His Eminence Archbishop Iakovos to Pope John Paul II. Tom is honored and grateful that at last count, he is blessed to have work in 10 countries and 30 states.